Shopping Cart
Your Cart is Empty
Quantity:
Subtotal
Taxes
Shipping
Total
There was an error with PayPalClick here to try again

Thank you for your business!You should be receiving an order confirmation from Paypal shortly.Exit Shopping Cart

Coretex Goaltending is pleased to finally unveil a revolutionary new piece of technology that will change the face of goaltending. Over the past century we have seen an extreme evolution of some of the goaltenders equipment, specifically the pads, masks, skates, and upper body protection. One area the equipment industry has been lacking in is the goalie stick, until now. It is virtually the same shape, size, and proportion as it was back when the position was in its infancy, so it was time for a change. Coretex Goaltending partnered with a local aerospace and quantum engineering firm to develop the latest in goalie stick technology: the Simultaneous Hydrostatic Interferometry Teleportation, or S.H.I.T. stick (patent pending).

With all the talk about the lack of goals being scored in today’s game, Coretex felt an obligation to leave its mark on the game and do its part to increase scoring. But several board meetings on our private yacht, company dinners in Athens, and brainstorming retreats to the Hamptons later, it finally dawned on us that we were in a difficult position being a goalie school with our primary focus on preventing goals, so we started to feel a sense of conflict. But we stayed with it and after our 4th or 5th company retreat to Dubai to our satellite headquarters on the 163rd floor of the Burj Kahlifa, we finally came up with a logical solution. 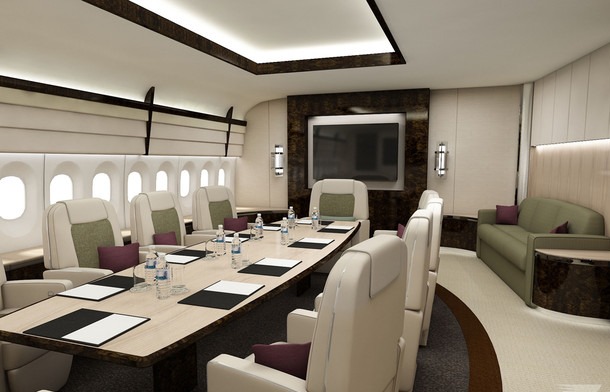 When a goalie makes a save (aka: when a shooter is cheated out of a goal), the natural reaction is to feel pity for the shooter. The only reason goaltenders make saves most of the time is because they have cheated, and done something despicable like play with sharp skates, shout insults as the shooter is winding up, not hold the door open for the opposing team as they enter the rink, work-out during the summer, scramble the opposing coaches roster card, do vision training, steal the other teams pucks in warm-up, or work with a sport psychologist. The point is, shooters shouldn’t have to work as hard as they do to score and be faced with the task of raising the puck to excessive heights of 12 or more inches off the ice over a goalies pad. Goals should come easy! On behalf of goaltenders everywhere I would like to apologize to shooters for making them frustrated, making them skate more than twice a summer, and just forcing them to adapt and become stronger, smarter, and faster. That is clearly of no benefit to the game. The only logical answer is to increase the frequency of goals at all costs, starting with the last line of defense.

If a piece of the goaltenders equipment was able to not only make a save at one end but simultaneously cause a goal at the other end, we can end the extremely serious issue of not enough red lights blinking in hockey arenas due to a goal being scored. We understand that saves, no matter how unlikely, athletic, spectacular, desperate, or even simply due to thousands of hours of practice and good positioning, are not worthy of fan appreciation. They are not only boring to watch but are destroying the game. People want to see puck-go-in-net, and each and every player who has ever been a part of a low scoring game owes the fans an apology as they are rarely exciting, and tend to un-justifiably divert the fans attention from new and exciting smart-phone apps they could be playing instead.

So we found a way to make goals happen more frequently without the goaltender being at fault. We asked ourselves one simple question- what if a piece of equipment was so advanced that it was capable of interacting with, and manipulating the space-time continuum to instantaneously transport a saved puck at one end and deposit that same puck in the net at the other end behind the opposing goaltender? We knew we were on to something, so R & D began work on the SHIT stick.

According to rule 3.3(a), the goaltender’s stick shall not exceed 3” in width, 15.5” in blade length, and 26” in paddle length. This gives a maximum surface area of 124.5 square inches between the paddle and the blade. Through extensive testing at NASA and CERN, we quickly discovered that this design is actually extremely inefficient with regards to simultaneous puck-stopping and teleportation, and changes had to be made. 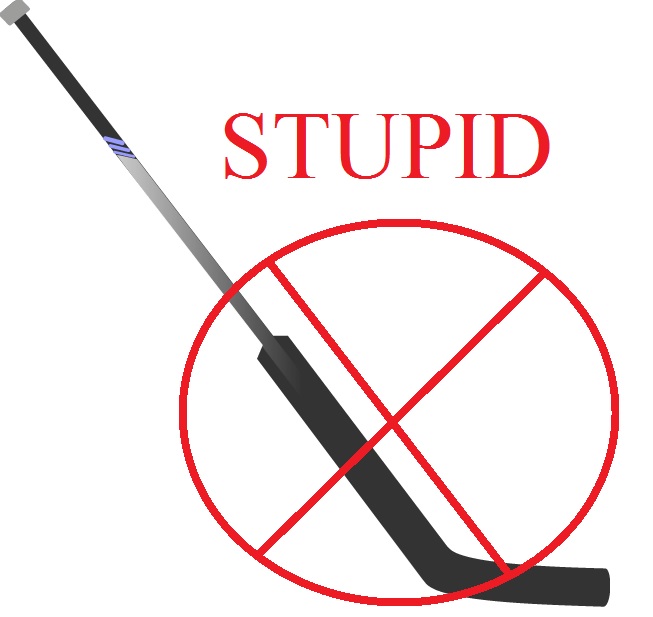 Instead, we developed a revolutionary new design that incorporates the natural phenomenon commonly found in nature, the wormhole through the fabric of the space-time continuum. The entrance for the wormhole is integrated in to the new shape of the goalie stick, a simple shaft with large diameter circular opening in place of the paddle and blade. 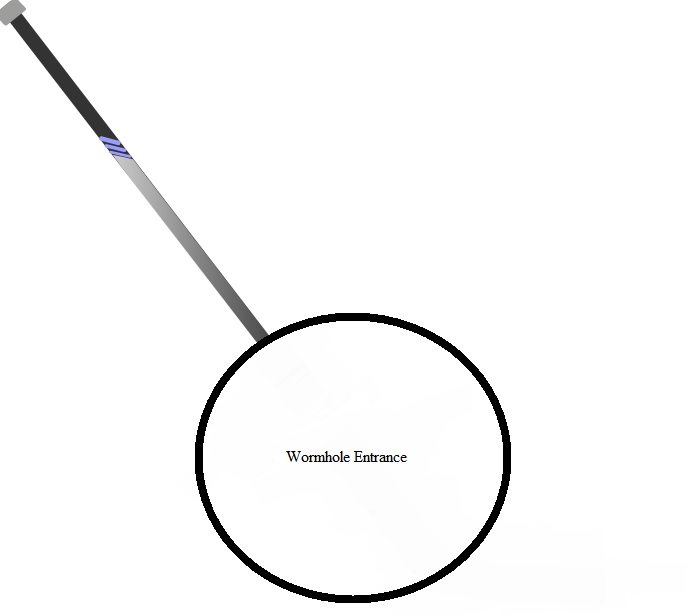 This design complies with current NHL regulations for equipment size, with the surface area of the material comprising the circle not exceeding 124.5 square inches. Here it is in use: 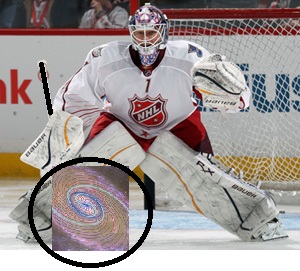 The goaltender will hold the stick as normal, and any pucks that enter the circle will not only be considered a save but subsequently directed to the inside of the net at the opposite end of the ice via some basic wormhole teleportation programming on a solid state quantum hard-drive prior to the game. 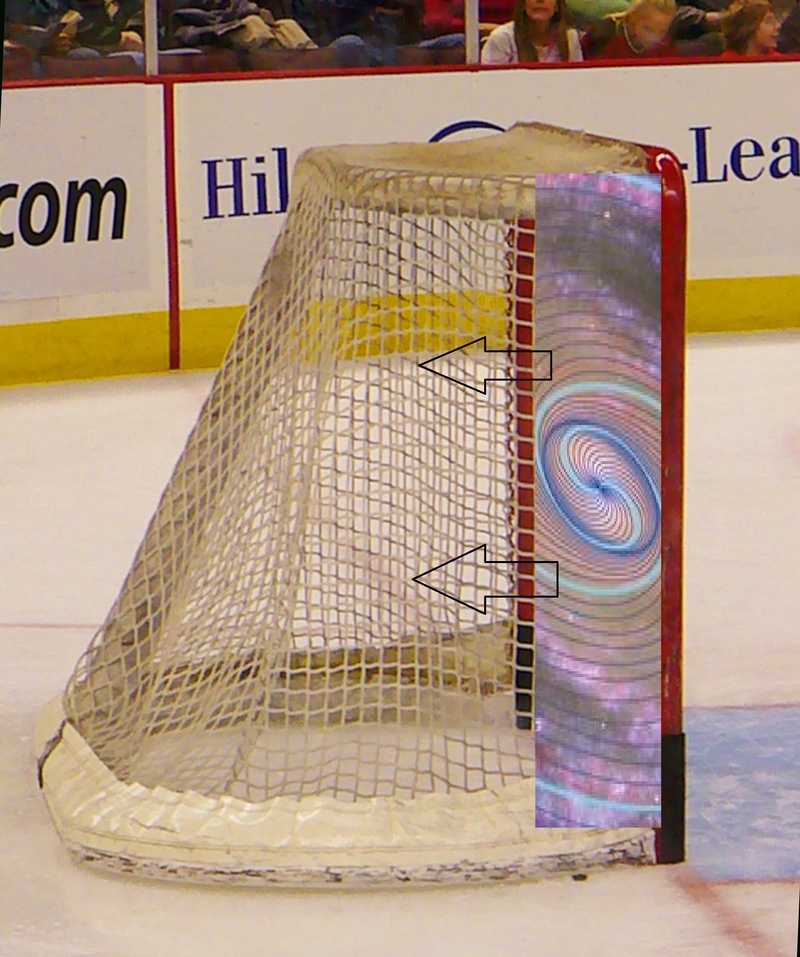 Initially we had some difficulty with directionality as the pucks would exit the net-end of the wormhole in the wrong direction and shoot back down the ice in an infinite loop at 99% the speed of light, vaporizing anyone and anything in its path while creating a small black-hole at center ice, but a change from a foam core to composite material for the circular opening fixed this minor glitch. Directionality can now be programmed to exit the wormhole to go bar-down, post-and-in just above the pad low blocker, or pop the water bottle which is a real fan favorite.

Of course the post-and-in parameters can be adjusted if facing a south-paw goaltender and can be done so using the iPhone app ($1.99 from the app store) that the coach will have access to on the bench. Exit velocity has also been reduced from 99% the speed of light to a mere 3194 MPH, so there is virtually no risk of creating a black-hole or reversing time anymore upon the pucks exit in to the net, although the sonic booms have been known to cause a brief ringing and discomfort in the ears.

Here is an expensive and highly professional graphic that shows how the SHIT stick works: 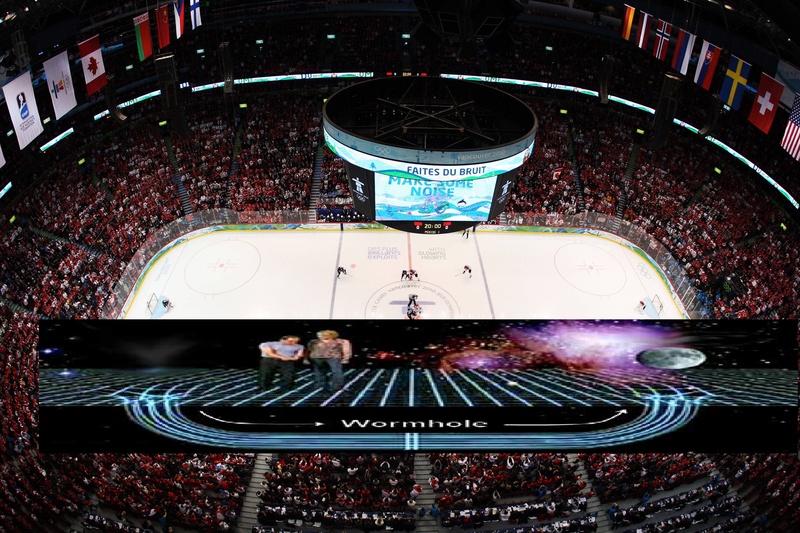 As you can see, the SHIT stick simply opens a wormhole entrance from its location at one end of the rink, and creates an exit at the other end directly depositing the puck in the net. All we had to do was bend space-time using a modest amount of energy, as the below diagram displays clearly with no need for explanation. 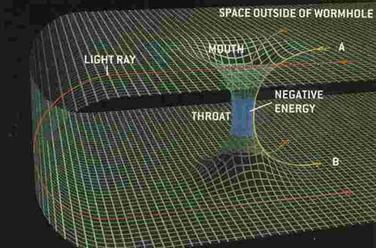 In conclusion, the SHIT stick finally solves all the scoring related problems with hockey. Goalies are finally able to consistently get on the score-sheet, hockey scores now resemble a typical lacrosse score, fans aren’t forced to waste their money watching saves or almost-goals, and goalies can leave the ice knowing that most of the goals weren’t their fault.

SHIT stick is available for sale through online hard-goods stores on the CERN website under the “Particle accelerator spare parts” tab, on the NASA website under the “used sound suppression water system” tab, and at www.coretexgoaltending.com. MSRP: $79.99, 30 day manufacturers defect and accidental apocalypse warranty. Comes with a free T-shirt.